One of our growers’ goal on the nursery is to grow the worlds hottest peppers for the garden. And, if there is a new King of Heat, we will grab some seeds and grow it!

What are the Worlds Hottest Peppers? 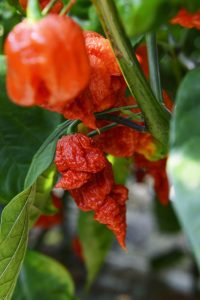 The current world record holder is the Carolina Reaper, with a scorching two million-plus Scoville units. But, just heard that maybe next year there is a new one coming along coming with a Scoville rating of over 3 million!

Although there is a much-heated debate on flavors of these hot peppers, I still think the ghost pepper, Bjut Jolokia, has the best taste at 1 million Scoville units.

And we now have the Chocolate Ghost Pepper as well!

As a matter of fact, for even better flavors, there is a new pepper this year, which we are growing, called Ghorpion. It’s a cross between Butch T Scorpion and Bjut Jolokia…but over a million Scoville units, and both having much better flavors. Please handle all these hot peppers with care and wear gloves!

If you can’t handle the scorching heat, there are great varieties of peppers with a little spicy kick like the Cajun Belle.

On the nursery, we grow Cincinnati’s largest collection of peppers, over seventy-five peppers that are perfect for the garden. Click Here to Find Your Perfect Pepper!

Cincinnati Gardening Made Simple! Have a question? Ask our vegetable garden experts!

Ron Wilson
Natorp's Leading Garden Expert. Listen to In the Garden with Ron on 55KRC. Posted
Previous Post:
How can I keep my container garden watered while away?
Next Post:
Annabelle Hydrangea